Saturday’s parking lot rally at the Field of Dreams was the last time JD Scholten will visit Storm Lake until the election next Tuesday, a reckoning for the Sioux City Democrat’s uphill effort to swing one of the country’s most conservative congressional districts.

Scholten says he stopped counting the number of times he’s visited Storm Lake and towns its size after at least his sixth visit. 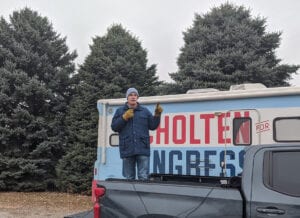 JD Scholten speaks to parked cars from the back of a pickup truck with Sioux City Sue in the background.

He’s mainly concerned whether or not people show up.  And they did, even on Saturday.

Despite a ranked matchup between Iowa State and vaunted Oklahoma State and a forecast that called for blowing snow that night, around 30 people braved the elements to hear him regale a story about the last, dying dairy farmers in Palo Alto County and deported dreamers in Iowa Falls.

“It’s really wonderful that we have him,” said Storm Lake resident Tim Humes, one of the most frequent attendants at Scholten’s appearances here. “He gives us hope, you know, he’s the spearhead of things. He shows that Democrats really care do care about us here in the sticks.”

From community centers to town halls — and since the pandemic, from parking lot to parking lot — he keeps showing up. He’s the only candidate for federal office who’s made a public appearance in Storm Lake since the onset of the coronavirus in March. (Senate candidate Theresa Greenfiled visited a farm near Rembrandt.)

Hence parking lot rallies at the Field of Dreams on Saturday and Frank Starr Park in the summer.

His stump speeches remain the same.

Scholten says the district needs immigrants to repopulate towns and counties that reached their top population estimate by 1940.

He says his first priority in Congress is passing comprehensive, universal health care, in other words, a public option that gives way to Medicare for All.

And more than anything, he focuses on anti-trust legislation. He believes his pushing of the issue prompted former Vice President Joe Biden and all of the Democratic presidential candidates to include it in their platforms.

To put a fine point on it, on Saturday he was wearing his late grandfather’s blue winter coat, which bears “Made in the USA” on its buttons and the name of a company that’s been out of business for decades.

“All I know about it is that he got it at Fleet Farm a long time ago,” he said after the rally, shivering as the evening wind picked up. “It symbolizes a society and an economy we’ve lost through corporate mergers … And, yes, it’s warm.”

From his appearance, his friendly disposition to his moderate messaging that resonates with rural and urban residents alike, Scholten’s campaign is fine-tuned to the point he can be competitive in Iowa’s most conservative district, said BVU Political Science Professor Brad Best, a longtime observer of the Fourth District. Of the 494,000 voters in the district, 206,700 are Republican. Only 130,000 are Democrat.

He’s utilizing a pathway to victory that includes “campaigning tirelessly,” which is “labor intensive and financially expensive.”

“You can’t fake showing up,” Scholten likes to say.

But is it enough to defeat State Sen. Randy Feenstra, a favorite of the conservative strongholds in Lyon, O’Brien, Sioux and Plymouth counties?

The path to a win for Scholten combines a repeat of the 2018 spike in Democratic voter turnout plus an “expansion of his coalition by winning the vast majority of first-time voters, many of whom are young,” Best said in an email to The Times. “So, Scholten is very much in the fight, but he’s running in a political space that is remarkably tough for a Democrat.  It’s not enough to win Storm Lake, which he’ll do by a clear margin. There’s social conservatism baked into the ideological landscape, and a Republican advantage, in terms of registered voters, down most of those country roads.”

Scholten believes his campaign is outpacing where he was in 2018, when he lost to incumbent Rep. Steve King by three percentage points. Early voting is head of schedule; around 70,000 Democrats and Republicans, plus 25,000 Independents have cast ballots thus far. He believes he’s underestimated in the polls, which have found him behind by an average of around five points.

“We’re on the final push,” he said. “Those polls were done before we’ve done our last push.”

Should he win, it will be the biggest upset since Berkley Bedell beat incumbent Rep. Wiley Mayne, R-Sioux City, nearly 50 years ago.